Answer: Where is this popular SF park that previously served as San Francisco’s only airfield?

Answer: Where is this popular SF park that previously served as San Francisco’s only airfield? 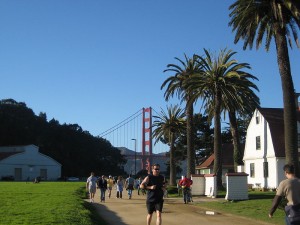 Crissy Field was originally an airfield, part of the United States’ Presidio Army Base. The Presidio ceased all military operations and the base became part of the federal Golden Gate National Recreation Area under the Base Closure Act, in the 1990s.

After becoming part of the Golden Gate National Recreation Area, much of Crissy Field was restored to its former condition. During 1998-2000, individuals and groups from schools, civic organizations and corporations planted over 100,000 native plants, in efforts to restore natural systems at Crissy Field. Community volunteers are still an important part of the efforts to maintain long-term stewardship of Crissy Field.