Before jumping into the specific financial metrics pertaining to the market itself, below is a review of some of the major economic context issues which underpin the market: rent rates, new construction and employment. 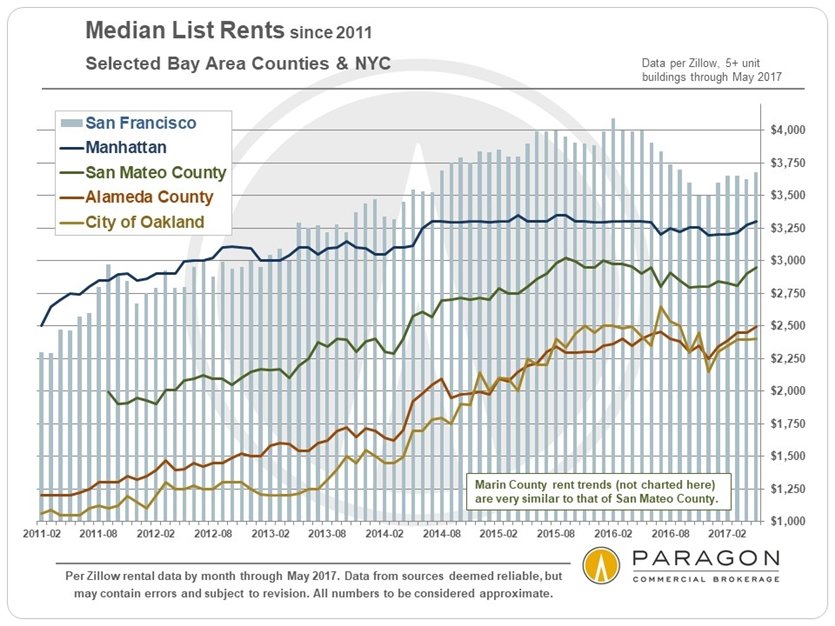 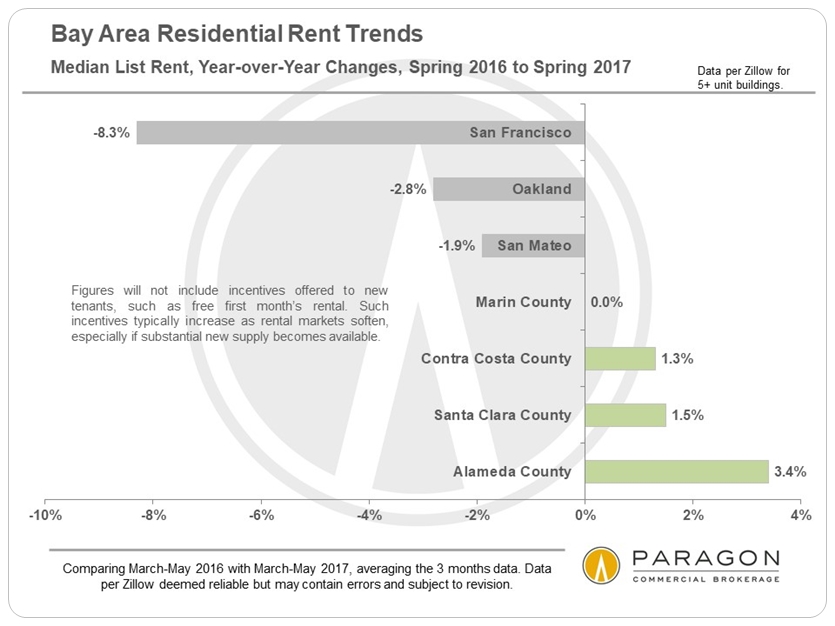 San Francisco still has the highest rents in the nation (the light blue columns in the first chart above), exceeding even Manhattan (in second place, delineated by the dark blue line), but they have been dropping since recent peaks in late 2015/early 2016. Generally speaking, rents around the Bay Area have either declined, in what had been the hottest markets, or seen their appreciation rates significantly slow, over the past year or so. 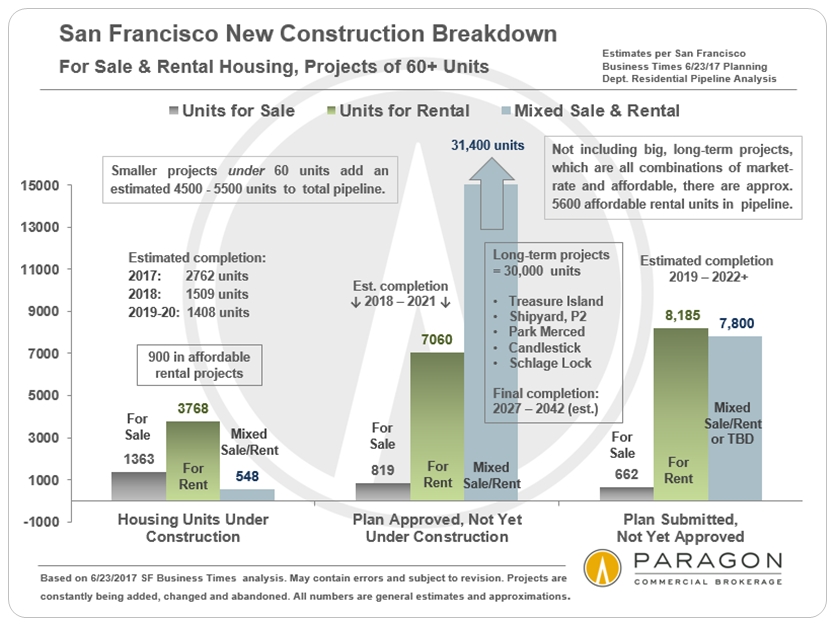 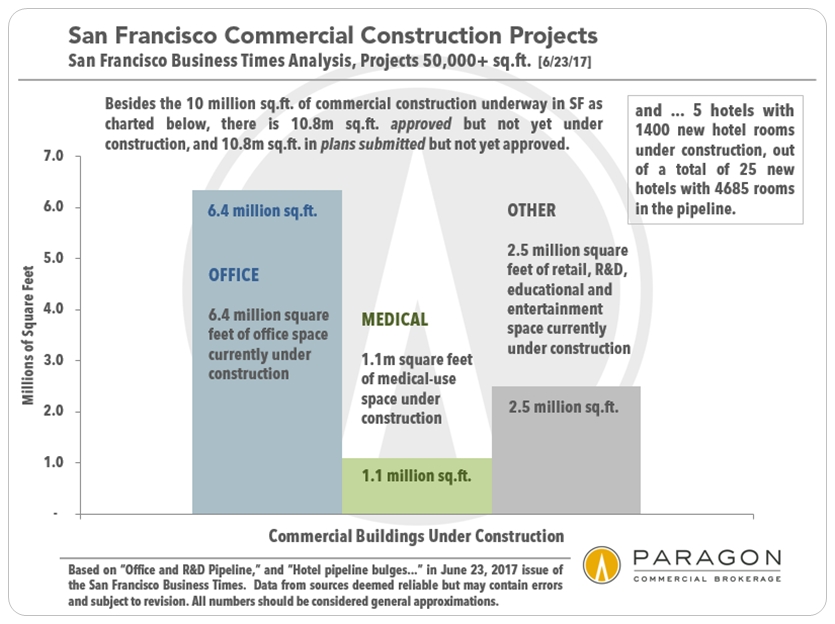 With a lot of help from the recent San Francisco Business Times analysis and investigation of the SF Planning Department Pipeline report, we put together the two charts above. As far as the SF apartment building market is concerned, the big issue is the continued construction of new rental units, how that is affecting the supply and demand dynamic, and rent rates. Over 8000 new rental units have been built in the past 5 years, with at least 10,000 more expected to hit the market in the next 5. This surge of supply is a major factor in the recent decline in SF rents illustrated at the top of this report.

Note that projects are continually being added to the pipeline, or their plans significantly changed, or even abandoned. Some of the big projects noted are very long-term, and economic and political shifts can dramatically affect future plans, sometimes very quickly. 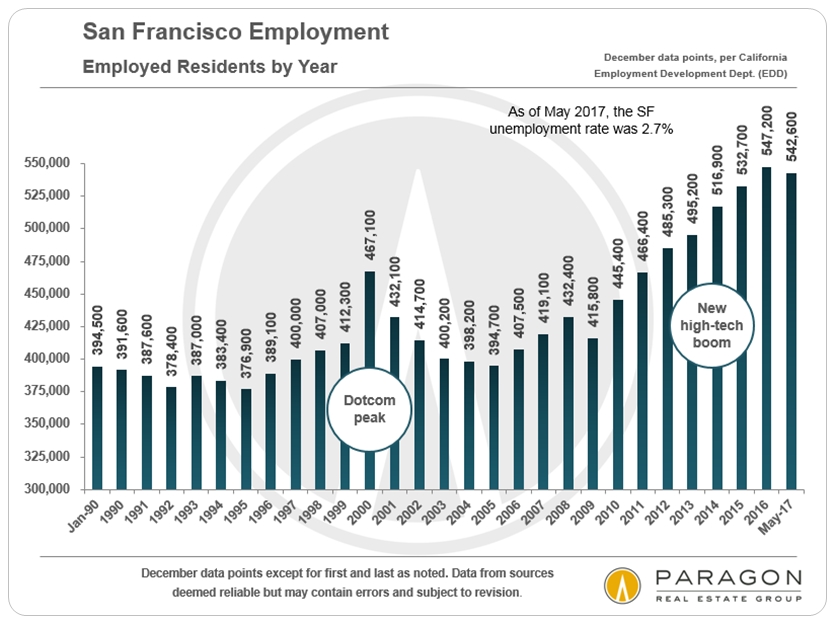 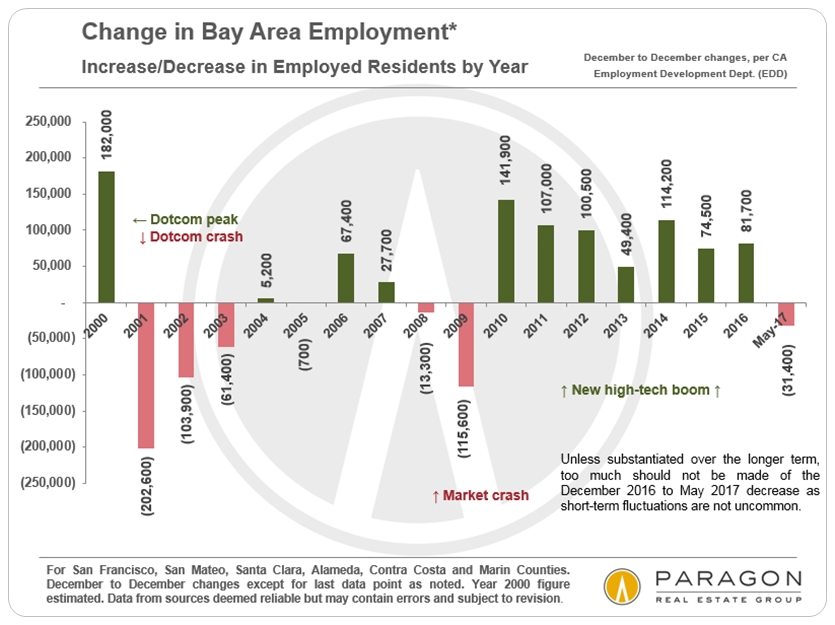 Ted Egan, chief economist for San Francisco, put it succinctly, Since 2016, a slowdown in tech employment has been driving a slowdown in total employment. This has been occurring both in San Francisco (first chart above) and in the Bay Area (second chart). Adding substantial new apartment construction to a slowdown in hiring is something of a double whammy putting downward pressure on rents. However, in the first half of 2016, employment numbers also fell, only to surge back into positive territory in the second half. Much is currently going on in the high-tech economy and it is not wise to jump to definitive conclusions or predictions based on short-term trends.

This report usually separates out the 2-4 unit and the 5+ unit apartment building markets, since they have somewhat different dynamics and valuation metrics. 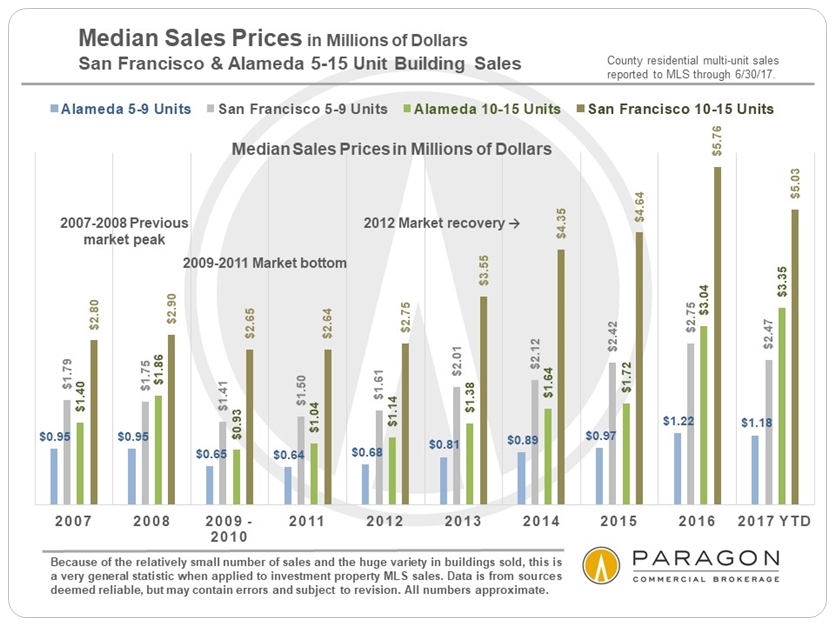 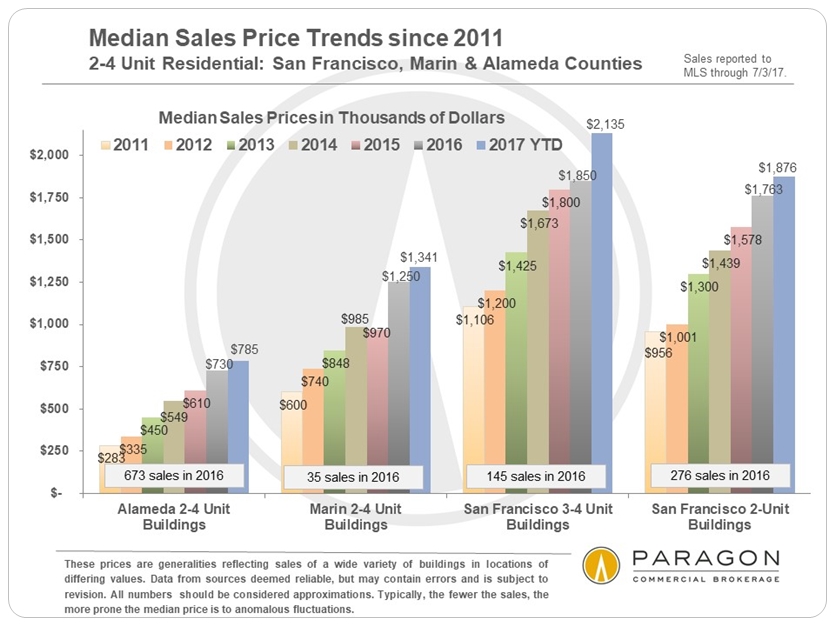 Generally speaking, across a variety of statistical measures, there appears to be some cooling in the 5+ market in SF from the feverish markets of recent years. Alameda, where prices are much lower, remains quite hot. The 2-4 unit market, which typically follows the general residential home market more closely, saw strong buyer demand this past spring. (Residential markets hit new highs in median home sales prices around the Bay Area.)

Note that median prices and average dollar per square foot values can be affected by other factors besides changes in fair market value, such as periodic, distinct shifts in inventory available to buy. Because of the relatively low number of sales in Marin or the absence of critical financial data in Alameda, some of the year-to-date analyses were not performed for those counties. 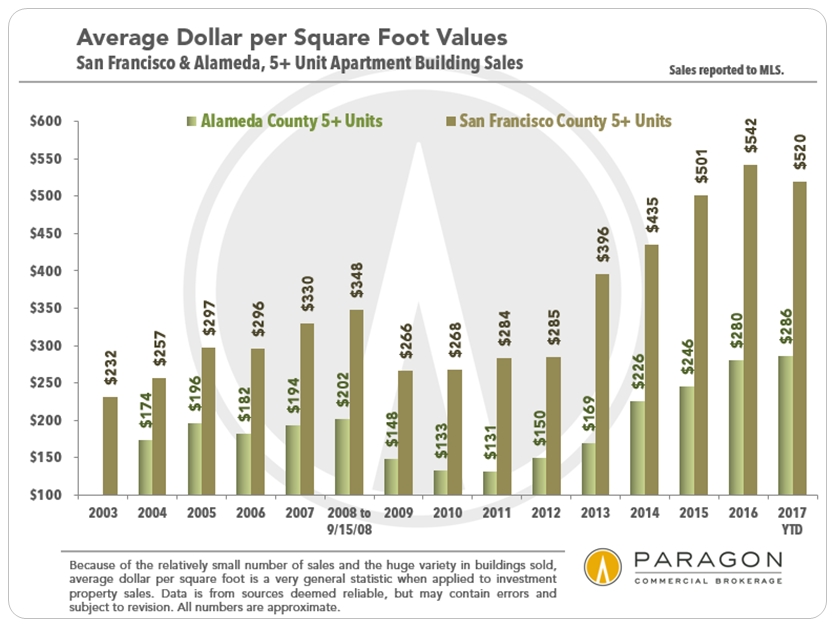 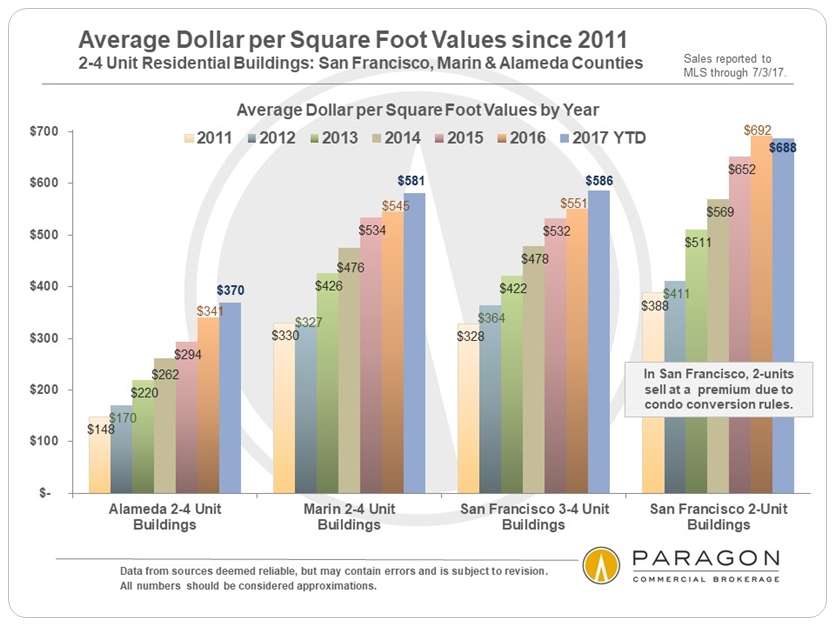 The analyses linked to below, from our previous quarterly report, review values by San Francisco neighborhood submarkets:

By all three of these measures, the heat of the SF 5+ unit apartment building market ticked down in the first half of 2017. However the changes are relatively small and end of the year data will be more conclusive. 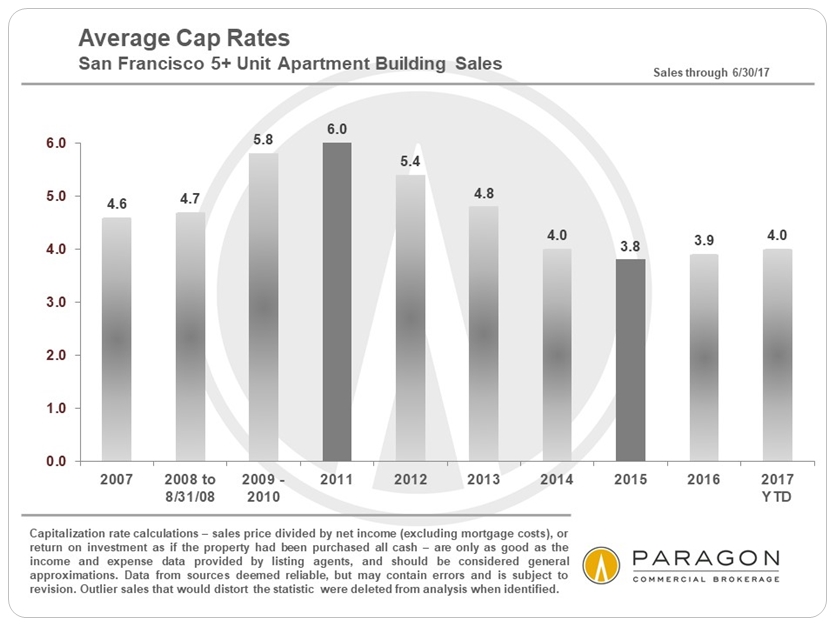 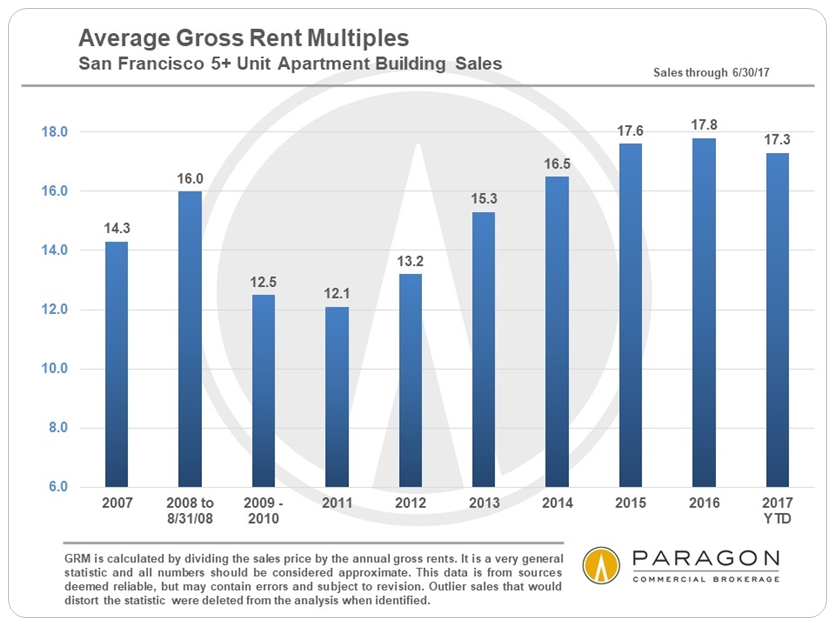 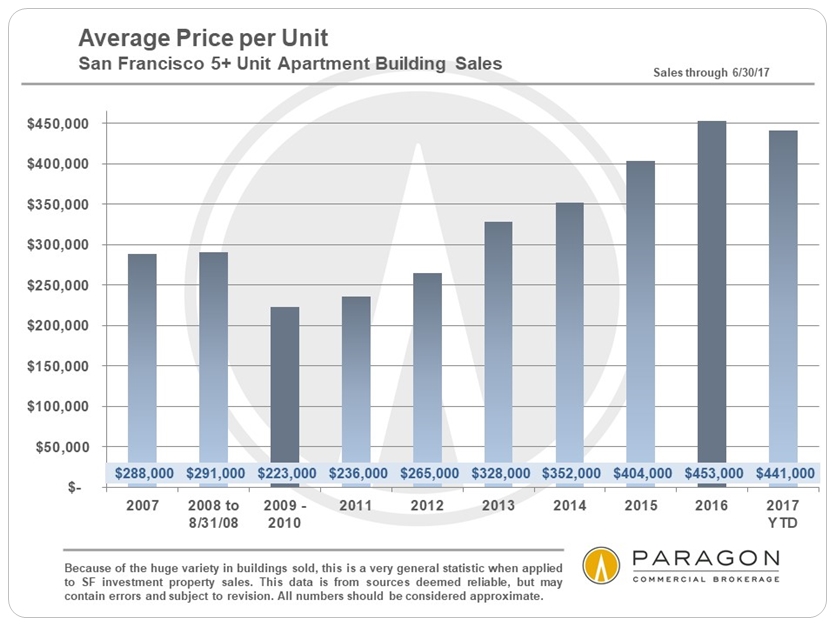 These analyses below, from our previous quarterly report, illustrate these statistics by city district: 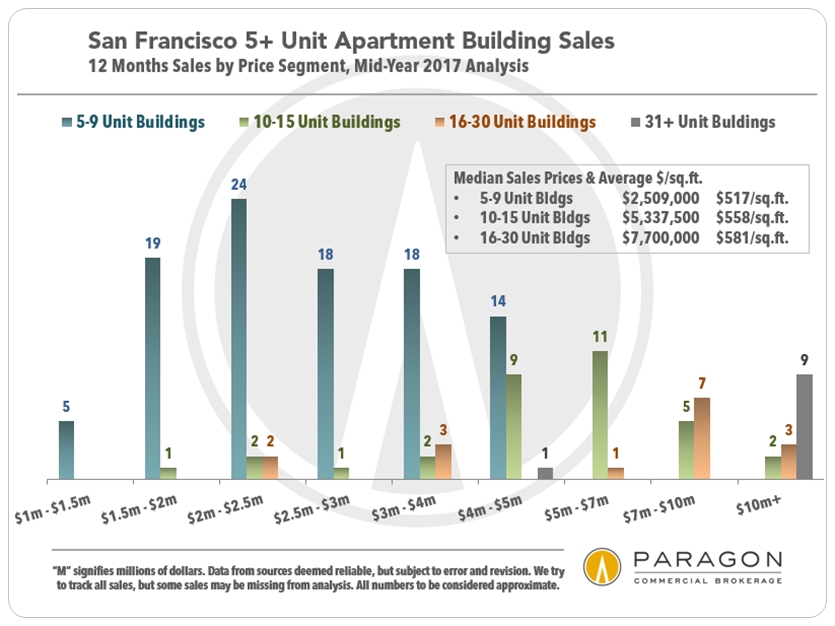 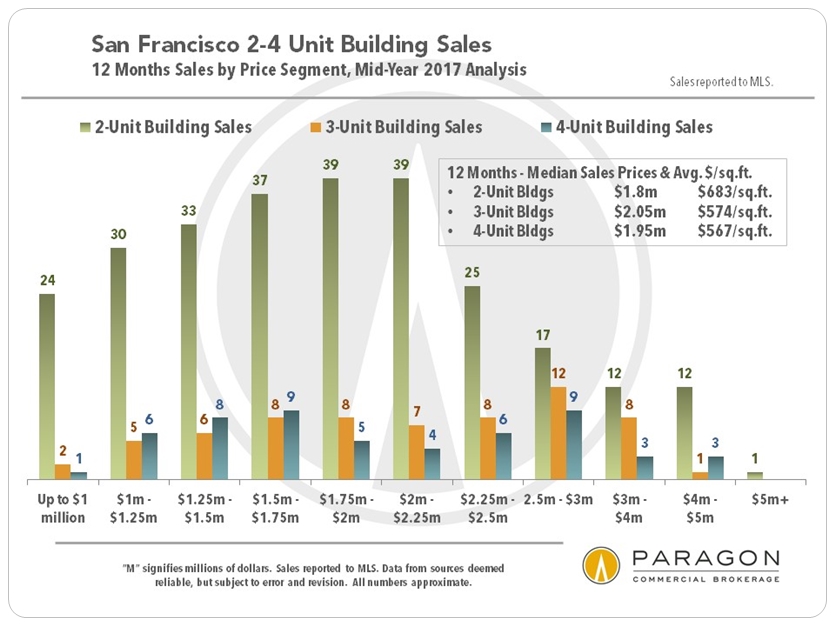 Besides the enormous overall increase in rents since the end of the recession, the other major factor underpinning the investment real estate market has been the extremely low interest rates. This chart graphs residential mortgage rates, which don’t apply perfectly to rental properties, but which indicates the trends that apply to both markets. No one has consistently predicted interest rate movements correctly in the past 10 years, but if significant increases do occur it will certainly affect the financial scenario for the purchase and ownership of residential income properties. 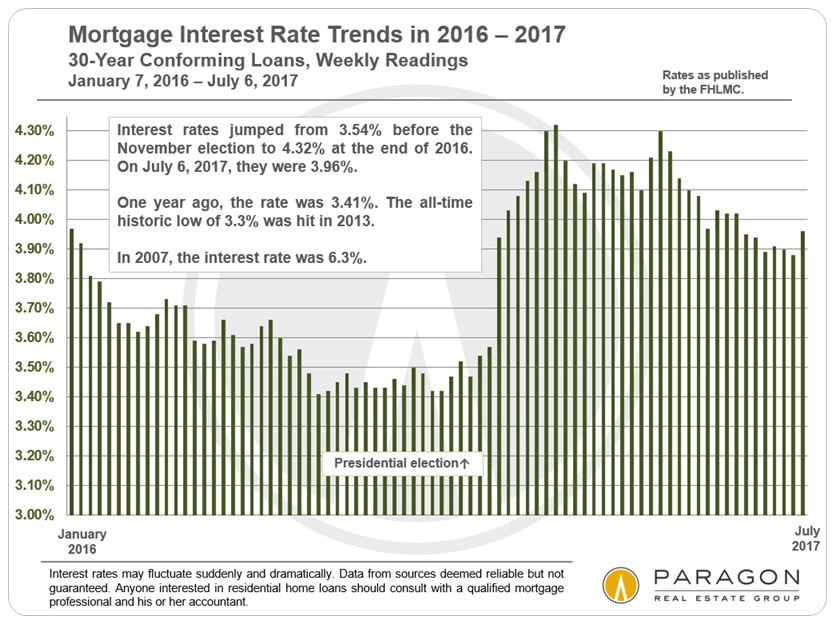 The inventory of 5+ listings on the SF market has increased a little over the past year, but not significantly. However, as charted below, Q2 saw a sudden spike in listings going into contract. Q2 5+ numbers are as follows: 43 new MLS listings, 91 total MLS listings on the market, 56 went under contract, and 43 closed escrow.

The 2-4 unit market in the city, which we did not chart, saw 178 new MLS listings come on market in Q2, a total listing inventory of just under 300, 131 listings went under contract, and 109 closed escrow. 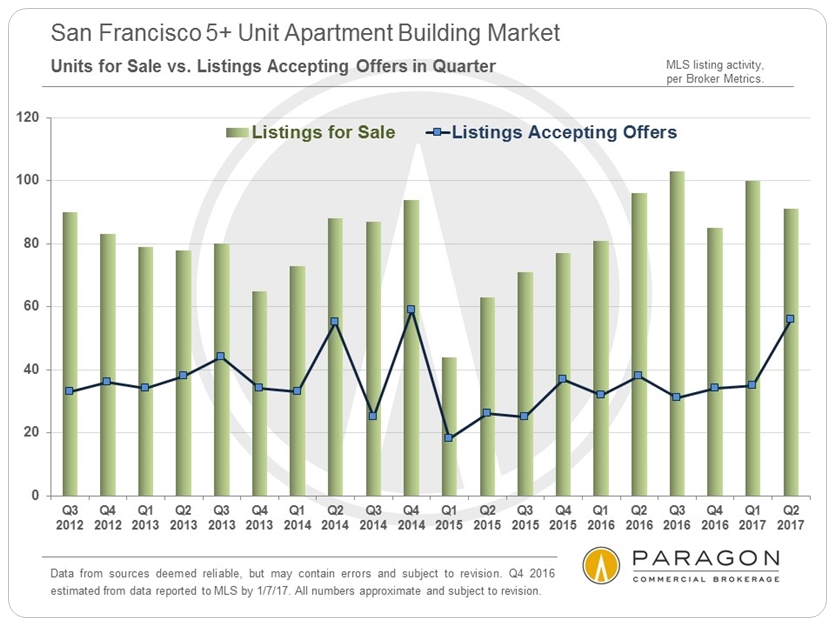 San Francisco is a unique apartment building market: the buildings are smaller and older than in most places, built in a wide range of architectural styles. The great majority of the market is under rent control, which makes upside rental-income potential a big component of valuation, even if it is unknown when that potential might be realized. Furthermore, the units are typically unlike those in suburban garden-apartment complexes, and within the city the variety in units is enormous, from large, gracious, full-floor flats in Russian Hill and Cole Valley, to studio apartments in Tenderloin brick buildings. 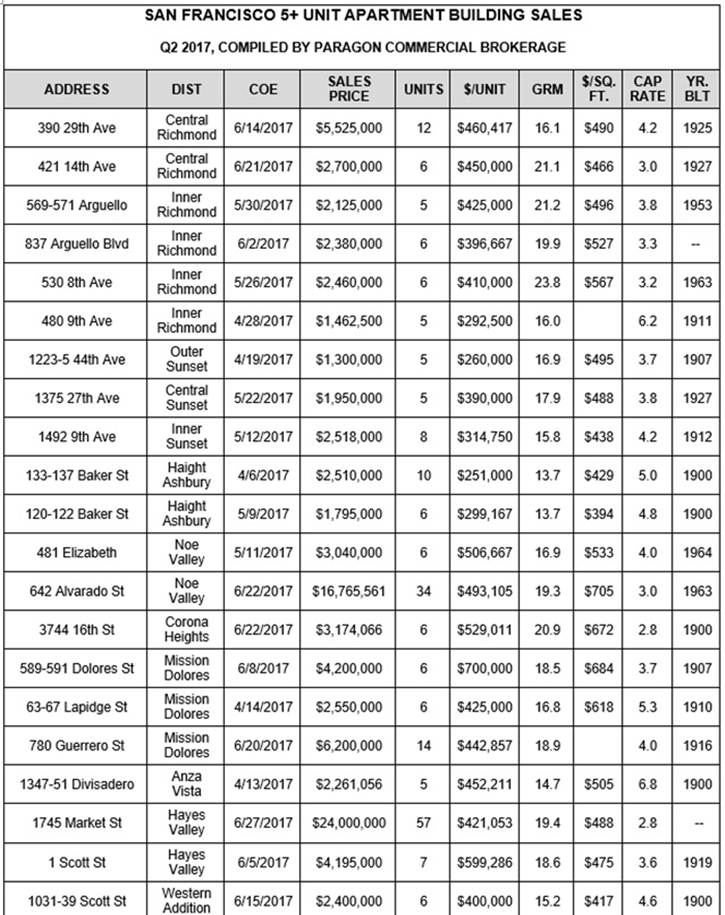 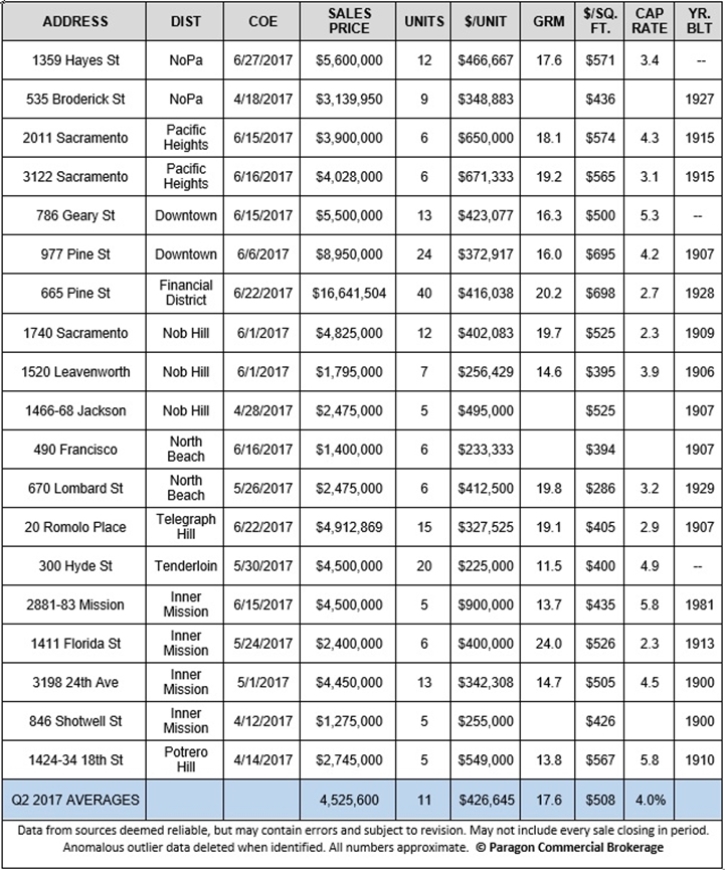 In real estate, the devil is always in the details: If you are interested in further data pertaining to any of the above sales, or regarding properties currently on the market, please contact me.

IRC 1031 tax exchange endangered? Numerous recent news articles in the likes of The Wall Street Journal, Washington Post and Forbes have mentioned the possibility that the current congress is eyeing the possibility of doing away with the 1031 tax deferred exchange, which would have significant, negative ramifications for real estate investors: The tax deferred exchange plays a critical role in sales volume and in portfolio development. Of course, there has been talk of this on and off for years, and has always come to nothing. How serious the threat is now, we cannot say, though it seems an odd change to occur under a President who is a real estate mogul.

According to Broker Metrics, which crunches MLS sales data, whether looking at the market in San Francisco or for all of San Francisco, Alameda and Marin counties, Paragon closes more residential income property sales than any other brokerage. 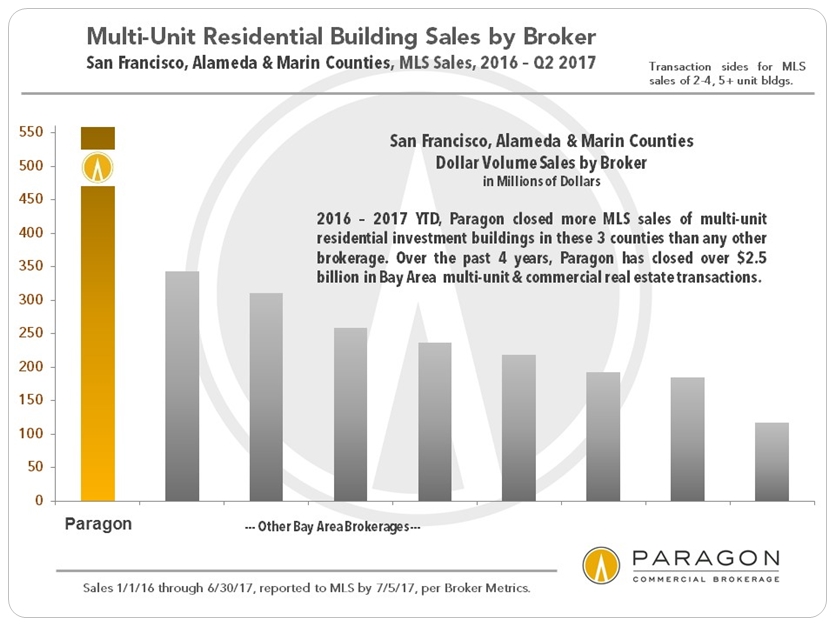 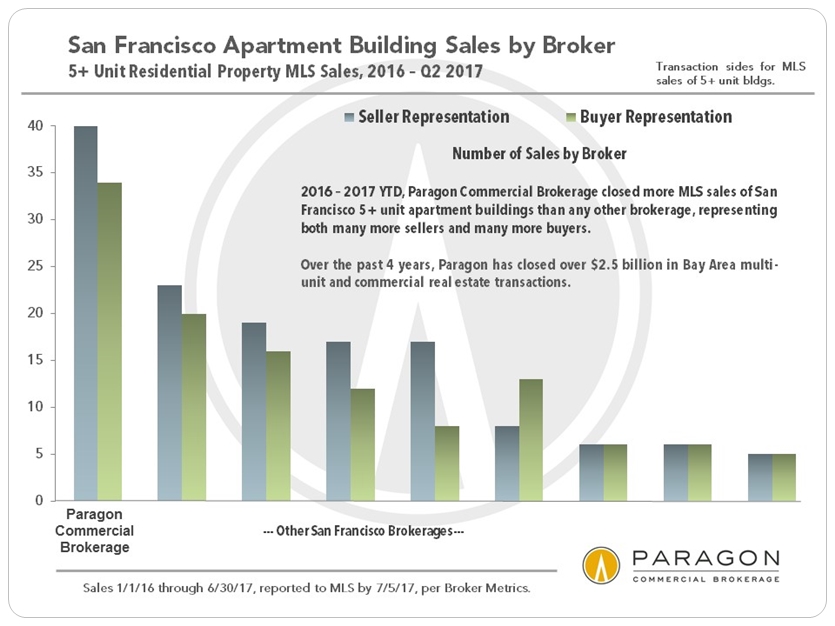 These analyses were made in good faith with data from sources deemed reliable, but they may contain errors and are subject to revision. Statistics are generalities: This is especially true for multi-unit properties, with the enormous range of property types, sizes, conditions, circumstances, qualities and locations. Cap rate and gross rent multiple analysis relies upon accurate data (instead of scheduled or projected income and expense numbers) being provided by listing agents, which is not always the case. Many Alameda County sales do not report cap rates, so any calculation in this report is based only upon those that did. Marin County often has too few sales to generate meaningful statistics. A fair proportion of investment property sales are not reported to MLS, which sometimes limits our ability for more comprehensive data analysis. When we identify outlier sales that we believe distort the statistics, these sales are typically deleted from the analysis. For all these reasons, any numbers in this report should be considered approximate.